Failure is an option, Fear is not – An Entrepreneurial Perspective 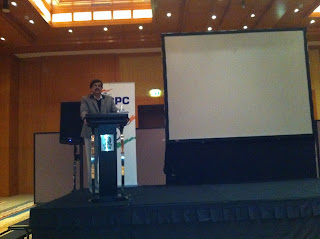 At the outset, I thank the organizers for giving me this wonderful opportunity of interacting with all of you, entrepreneurs.
A calm sea never produces a skillful mariner. Navigating on shallow water near the shore without exploring the sea is a sin. Not taking a risk in our life is a sin in my opinion.

I salute all of you – the risk takers who focus on “value addition” than just “validation”.  As value creators, I consider you as the creamy layer of the society. SME business is the backbone of any economy.

Well, given my time slot, I do not have the liberty of extending my vocal skills on exchange of pleasantries. Hence, let me take you to my topic – ‘Failure is an option, but fear is not’ – An entrepreneurial perspective.

There is a saying that for a 3 hour talk you can prepare in 30 minutes and for a 3 minute talk you have to prepare for 30 hours. But I have not come here with any prepared script. Today I decided to speak from my heart than from my head. It will be more of my experience & emotions than structured/research reports.

Three issues I intending touching upon –

Every day we hear about declining GDPs/growing unemployment and so on. I do not want to repeat them here … let me tell you a story …

‘Year 2008, It was a beach town in the Caribbean islands. One day a rich tourist walked into a hotel. The whole town was deserted. These were bad times. Everyone was in debt.
The guest pays 100 US$ to the hotel manager. He told the manager that he will go up and see the room and come back.

Mean while the tourist comes back. He did not like the room. He took back the 100 USD not and walked out.

No one earned anything. But everyone was out of debt. Everyone’s credit limit revived. The end result of all these fancy method is the great recession. A rocking horse keeps moving but does not progress. Every economy thought that it was growing but in reality there was only ‘motion’ and not ‘progresses’.

The epicenter of all these was in United States and tremor was felt all around – economic chaos all around.

We went through series of changes in economic themes –

Growth & Austerity are oxymorons.  Today we have two contrasting forces pulling us in different directions


Developed nations are not able to force sacrifice on people, hence they soft peddle the debt contraction option. They take new debt and repay old debt. The nations are rolling over their finances. They are just elongating the detonating wires and delay the blast than diffuse the blast.

This is the fragile economic world today. We are living in troubled times. But we can not complain. The role of entrepreneurship is pronounced more in these troubled times. We need more entrepreneurs, more risk takers – But we should not be afraid of failures.  Now we came to the second issue ‘Embrace Failures’ ….

You might have heard of the stories of achievers from motivational Gurus. Abraham Lincoln, Thomas Alva Edison, Sir C.V.Raman – all of them achieved after fighting innumerable battles. I will not address these again as you might be already familiar.

I will narrate the story of an SME sector businessman in USA.

A business execute was in deep debt and could see no way out. He sat on a park wondering what to do. Suddenly an old man appeared, listened to him and said ‘I can help you. Take this money, meet me exactly one year at the same place. You can pay me back at that time’.

He gave a cheque 5 million USD signed by Jhon D.Rock Feller, the richest oil magnet of that time.

The executive instead of using the cheque kept it in his safe and started with renewed optimism At the back of the mind the 5 million USD was giving comfort to him. Slowly he came out if his debt, while the cheque was lying in his safe.

Exactly one year later he went back to the park. The old man appeared. Just before handing over his cheque, a hospital nurse came running, she said, ‘good I caught him. I hope he is not bothering you. He goes on telling people that he is Jhon D.Rock Feller. He is actually a patient of our hospital’.

The executive was stunned. He realized it was not the real but imaginary money that gave him the courage, that courage made all the difference, Humility in success and courage in failure is what we have to follow. Failure is an option, but fear is not!

Now we come to the third issue. It is always easy to preach than practice. Ronald Regan one said – ‘When your neighbor loses the job you call it a normal business cycle, but when you lose your job you call it a great depression’.

Similarly a question may arise in your mind whether I have ever faced a failure – Am I talking here as a preacher or a practitioner of entrepreneurship. The question is valid. Here is my story …

Life was a smooth ride for me, nice things were happening at a right times. During this easy phase, I was also not an exception that hits everyone, yes; I am talking about the entrepreneurial bug. Your life is successful; you have spent a decent time on other’s business expansion. Why not we do ourselves! This bug also hit me. Success is lousy teacher; it seduces the smart people to think that they can never go wrong.  If you are successful in one area, you tend to think you will be successful in all areas. The tail wing was taking me to the dizzy heights with no exposure to failures. Ego is an anesthetic that deadens the pain of stupidity. Repository of ego base started setting into my system slowly. I was feeling that the bottom is overcrowded; therefore I should reach the top quickly.

Then came the sudden wind that twisted the whole picture, a wave of macroeconomic changes, led me to face the jaws of my first defeat on my first entrepreneurial move.

The people who betted on me departed, the friends who invested with me turned into vociferous foes, the illustrious personalities on my board who voluntarily annexed themselves with me, resigned from the board immediately at the first sight of the problems in my business model. Suddenly I saw chaos around me. I started getting so many free advices. No one had time to go into the process of “why the failure”, but everyone looked at the outcome and not the process. I realized the world rewards the end and not the means. The world recognizes the performance and not the passion.

Getting back to the MNC corporate main stream was as a problem, as they do not take the executives who take entrepreneurship, seriously. The question that crossed my mind was – How do we handle failures, miseries and manage success or happiness? Success is your friend, failure is your teacher, I thought. Excess happiness syndrome and the lack of exposure to failure daunted me, tested me.

I had two options – “Brood over, Get frustrated and perish” or “Accept the realities, identify my USP and understand to recreate myself”.

I opted for the second one, I could not revive the unit or invest in that unit I could not get back to my plum job in a MNC – hence I took up a reasonable position in a relatively small corporate belonging to a Board of Director of my failed company.

The Board of Director who took a risk on me at this bad phase is a UAE based Businessman to whom I will ever be grateful. In Ten years I could do my doctorate, establish our corporate brand strongly in the market and stand in front of you with the wisdom gained, in the form of the book “A Saint in the Boardroom” Every pain has a gain, you see. Have you every failed in your life? If not, I invite you to taste the thrills of the failure. I guarantee you; you will become a balanced personality with abundant wisdom. Success tells you what you are; Failure tells you who you are. Failure is an option, while fear in not. Folks, it does not matter what happens to you in life, but what you do when something happens is the key.

Having staked my claim of being a Practioner of entrepreneurship, now I take you to my concluding session –Concluding Remarks

Life may crown you or crucify you on a cross…

Chase your passion but learn to face the outcome of whatever nature. Focus on the roots and not on fruits. Failure will teach you great lessons. Don’t shy away from failures in your entrepreneurial role. Never give up – stay hungry, stay positive, grow your risk appetite. Convert your inner sparks into fames of achievement. Continue to build entrepreneurial spirits into the societal DNA.

Finally, again, I invite you to taste the thrills of failure. I guarantee you that eventually you will win!
-          Good Luck!!
Posted by Dr.Durgadoss at 19:05