The Immortals of India….. Chiranjeevi: Where do they live? 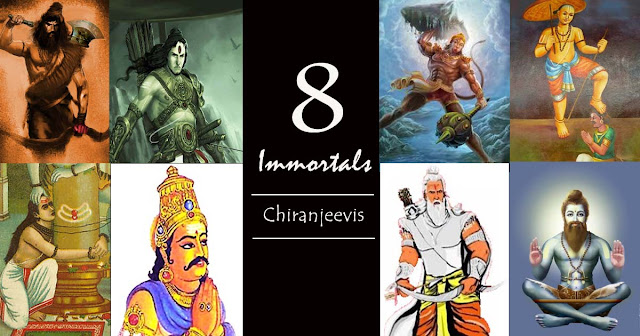 THE average person’s introduction to the word Chiranjeevi is mostly through the word being used a prefix for sons or daughters in some languages. Also, popular is the usage in wedding invites whereby the bride and grooms names have the “Chi” suffix. Many will also remember the BR Chopra Mahabharat in which the aashirwad (boon granted by elders when shown respect) of choice was Chiranjeevi Bhava (Be a Chiranjeevi). So what does the actual word mean? It actually is an amalgamation of chiram (long) and jivi (lived). Essentially, a person who has long life or one who does not die.

There is a very poignant Sanskrit vrse or shloka that lists the names of the chiranjeevis. It is believed that recitation of this shloka itself will imbibe you with positive vibes and a long life. The Shloka goes thus.

The above lines means that by daily remembering these 8 immortals (Ashwatthama, King Bali, Ved Vyasa, Hanuman, Vibhishan, Kripacharya, Parashuram and Rishi Markandaya) one can be free of all problems and live for 100 years.

There have always been rumors about sightings of the chiranjeevis in India. How even in these modern times they have interacted with men of our times. Especially common are the reports of sightings of Hanuman and Ashwatthama. They live in different forms and it is stated in Bhagvatam the Maha Puranic Text that they will assemble at the end of Kaliyagua at the time of birth Kalki Avatar Sambhala Village, Dravida Desha on the banks of Tamiraparni River.

It is interesting to note that all these chiranjeevis are supposed to be great warriors. Immortality by itself can be looked at a curse or as a boon especially for a warrior. For all others the immortality was a boon, a reward or recognition for the stellar role they played in shaping the events of their times but the shloka starts with Ashwatthama who was given his immortality as a curse.

Why did he get his immortality? And is he condemned to suffer in pain for eternity? We will look into this in the next weeks post.
Posted by Dr.Durgadoss at 00:34